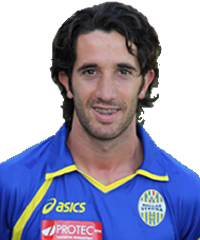 I was born in Rome 30 years ago, the last of a large, poor Catholic family.  Even though not a practising Catholic, my Mum frequently went to Mass on Sundays and used to take me with her, as a young boy already searching spiritually.  I was 5 years old when my parents, despairing because I had turned the flat into a football pitch (I used to demolish everything by hitting it with a ball), signed me up for a football school.

Two years later I was taken on by the nursery in Lazio.  That is where my life of sacrifice began: mornings in school, lunch in my father's car on the way to the football field, where I digested my food!  After training, homework in the car going home.  Once at home, if I hadn't finished my homework, I didn't eat in order to get it all done, but with the risk of falling asleep on top of my books.

If up to the age of ten I played the holder, for the next four years I was just on the bench.  I had the same problem as L. Messi, the most famous player for Barca: I didn't grow in stature, therefore I did not have the physical strength, even if my technique was improving.  Added to that was the discouragement I faced, coming mostly from those who should have been the ones to help me through this trauma: my parents.  Every Sunday they would insult me and call me allsorts, they went on for such a long time that they managed to make me cry for a whole day as well as loose my appetite.  Soon, however, I discovered the solution to my height problem: I needed to take growth hormones.  In one year I even grew ten centimetres.

From this moment on, I went onto the pitch with a different attitude.  I played with a wrong attitude, accompanied by a lot of anger.  My career was now taking off, but not my person, my spirit.  Every Saturday I used alcohol and hash...at the age of 19 my father died, and from that moment a difficult period started in my life.  My relationship with my father had been different from that with my mother, in that we used to meet up every week.  He could show affection towards me, whereas my Mum usually only gave me instructions.  Straight after Dad's death, I went far away from home for the first time, about eight hundred kilometres away.  I fell into depression.  I didn't go out much, I spent a lot of time in front of the TV and tried to harm myself.  I met a girl in a nightclub.  I thought I had met my lifelong companion, but the relationship didn't last long, even though I truly loved her.  The following year I was transferred to Taranto.  There I started to experience success, glory, but not the happiness and love I was searching for (the Bible says that Jesus can give these things, and not as the world gives.  He is the way, the truth and the life).  We won the C2 championship, the current second division.  Many teams in Serie A were watching me, but I ended up with the Ionic team.  I searched for new experiences in Taranto....I wanted to forget my ex, but I couldn't; I wanted to fall in love properly, but with every girl, that which I thought was love became just a sexual experience.

The following year, right at the start of the championship, I had to have an operation for a hernia.  After the operation, however, I made a speedy recovery and I scored seven goals.  So during the time of recovery, in January, I signed a four- year contract with Siena (finally Serie A!), but I remained on loan in Taranto.  January was also the month of another change in my life.  There was a Brasilian player for Taranto called Rafael Tesser.  He was always happy, very sweet and sincere with everyone.  I felt drawn towards him more and more.  One evening I was invited to his house.  Rafael was already married and father to two children, even though he was only two years older than me.

After dinner (an exquisite 'Brasilian speciality'), the attacker took the Bible and started talking to me about Jesus, about His message and His work of salvation.  Those words moved something within me, to such an extent it made me feel on edge.  Nevertheless that evening I decided to go to church, if only out of curiosity, to see whether other people were like Rafael and whether, as my friend said, there really was love amongst them.  When I went into the church, I noticed that, apart from praying, they sang with such joy to the Lord, and that really hit me.  And although I wanted to sing like them, I couldn't and I was embarrassed!  It's obvious: I didn't have the love of God within me.  But one evening I prayed to the Lord, saying: "Lord, if you really exist, I want to know you.  Save me and change my life."

The Lord answered me.  He put His hand on me and took away the burden that I had been carrying around for years.  He gave me His light load 10, leaving in me in its place God's grace, His peace and His joy.  That happened during a meeting in church, and as at that moment I was glowing with joy and I started singing in church.  The whole thing was noticed by a couple not too far away from me, on the same row, who, having noted my previous behaviour, understood everything and they hugged each other.  This first time was great, I was very happy.  I would sing anywhere: in the car, listening to Christian music, during training, on walks, and in the supermarket when I was shopping.  My depression by now was just a distant memory.  With Jesus I found a great family.  Wherever I go, (now I play in Verona) I meet a lot of brothers and sisters with whom I share the same faith in the Lord; there is a strong bond with each of them because we share the same Father, God.  In the world I wanted true friendships where I could give and at the same time receive love.  But I have understood that true love needs to be understood and received, and that comes from hearing the Gospel and accepting Jesus.  Only then can you show love.  It is part of my everyday experience, knowing more and more of the love of God, and when I love Him more, I also love others, friends and brothers in Christ.  What I would wish for the future is a wife and children with whom to serve God.  To be able to say like Joshua: "As for me and my house, we will serve the Lord".  (Book of Joshua 24:15).
10 Matthew 11:28 "Come unto me, all you who are tired from carrying heavy burdens, come to me and I will give you rest."